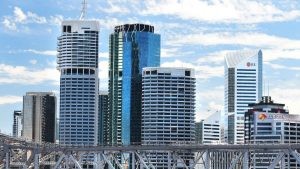 BRISBANE is well placed to take over as the nation’s best performing capital city housing market in the next five years, a leading property analyst has predicted.

But while the city looks set to benefit from better housing market conditions, don’t expect house prices to reach the giddy heights they have in Sydney and Melbourne.

Home values across the city have risen at an annual rate of 1.2 per cent in the past decade — half the pace of inflation and dramatically lower than Sydney or Melbourne where annual gains have averaged 6.3 per cent and 5.9 per cent, respectively, over the same period.

Mr Lawless believes the relative gap in pricing between Australia’s largest cities is likely to be one of the factors that attracts housing demand to Brisbane, as well as its affordability.

“Based on median household incomes, Sydney households are earning only 12.9 per cent more than households in Brisbane and incomes across Melbourne are actually 0.7 per cent lower than Brisbane’s.

“This is also visible from more formal affordability measures such as the dwelling price to income ratio and the proportion of household income required to service a mortgage.”

“Similarly, the proportion of gross annual household income required to service an 80 per cent LVR mortgage is now 48.4 per cent in Sydney compared with 39.9 per cent in Melbourne and 31.7 per cent in Brisbane,” Mr Lawless said.

Among those factors is population growth, with overseas and interstate migration to southeast Queensland ramping up.

Net interstate migration to Queensland is now the highest of any state, outpacing Victoria for the first time since June 2013.

He noted the state’s employment market was also improving.

Jobs growth in Queensland is currently the fastest of any state or territory, with 113,000 jobs created over the past year.

“Jobs are an essential component of a healthy housing market and a strong labour force has been a key missing ingredient from the Brisbane housing market up until recently,” Mr Lawless said.

“The improved jobs sector, together with high rates of migration and an affordable mix of housing is a solid recipe for stronger housing market conditions.”

But he warned that headwinds such as tighter lending conditions, an oversupplied unit market and higher household debt could prevent a surge in housing values.