Here is a wild set of statistics from the Bank of International Settlements on growth in house prices around the world.

It shows Australian house prices are up a world-leading 6,556% over the past 55 years, or 373% when adjusted for inflation. That smashes the average increase of a 2,124% uplift in house prices (173% in real terms) across advanced economies over a similar period. Australia’s record is not quite as impressive as New Zealand’s, with 7,459% growth over 53 years.

UBS economists George Tharenou and Carlos Cacho said in a note to clients today that Australian house prices “astonishingly super-boomed” in that period, with “a world record for the longest continuous ‘upswing’.

“Growth averaged 8.1% y/y in that period, with the level of prices doubling every 9 years. While this was ‘only’ the 6th fastest among advanced economies, since
2000, the cumulative price rise of ~150% in Australia (& NZ) was actually the largest,” they wrote.

“This price boom was driven since 1990 by collapsing interest rates, seeing household debt-income nearly triple to ~195% now, but household wealth-income lifted even
more to ~742%, both the ~highest in the world,” Tharenou and Cacho said. “This supported consumption via the ‘household wealth effect’, as the household savings rate ~halved in recent years to a post-GFC low of [less than] 5%.”

They share this chart, which tracks house price appreciation — and the spectacular collapse of the Irish property market through the GFC — in select countries around the world since 1970. 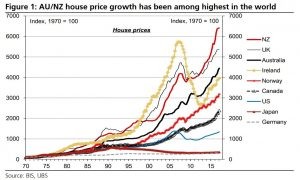 Time will tell if anything like the horror of the Irish property market implosion will ever be repeated in the modern era.

Catch the wave of migration from Sydney to Queensland