Carseldine: Suburb acts as boomgate to the north

REGULAR peak-hour motorists would know this suburb because of a notorious intersection which features daily on radio traffic updates, but locals say it’s not an issue.

Carseldine, which is some 16km north of Brisbane CBD, is supposed to be the gateway to the Sunshine Coast but it’s more like a boomgate for motorists travelling in either direction.

It’s where you can expect to wait several traffic light changes before making it through the intersection of Gympie and Beams Rd, Carseldine as you either head north or towards the CBD.

“It’s busy but it doesn’t worry us because we know how to avoid the intersection. We use other roads,” said Laura Young who owns Ronny’s café which sits outside the main entrance to Carseldine Central.

The shopping precinct, which opened in 2009, is situated on the north-western corner of the intersection.

It has 25 tenants, including at least 10 casual dining or fast food restaurants and cafés, although that will increase once a 246sqm expansion is completed. 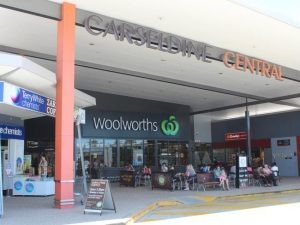 Local councillor Amanda Cooper has called Carseldine Central the “heart” of the suburb.

“It is a hive of activity and has given a really nice heart to Carseldine because before that you really didn’t have anywhere to go. You had to go into Aspleyto eat or shop,” Ms Cooper said.

The only downside for locals is that the shopping centre has become a victim of its own success.

“It’s the one thing (parking) we need more of because this centre is so popular and really the only place to socialise in Carseldine,” said Ms Wood.

Directly south of the centre, across Beams Rd, is the wealthier and older area of Carseldine known locally as the winery estate.

It’s where you could almost get tipsy just reading the street names which include Chateau, Sherry and Cabernet St and Moselle and Sherry Place.

Innova8 Property principal Mick Spillane, who has been selling properties in the area for a decade, said people who buy in the winery estate could possibly afford a drop of some of the finest reds and whites.

“There are quite a few homes that have sold for more than $1 million in the winery estate and a lot of them were built in the ‘80s and ‘90s,” Mr Spillane said.

“That’s considered the older part of Carseldine while the eastern side of Gympie Rd is the newer area of Carseldine.”

The newer area Mr Spillane refers to sits between, and includes, Lacey and Cowie roads.

The area was prone to flooding before developers rectified the issue and erected hundreds of new townhouses and homes, said Cr Cooper. “There used to be chicken abattoir on Cowey Rd as well but there were flooding issues,” Ms Cooper said.

“A developer worked out the flooding and since then it was able to be developed because before that there were rural lots and now there’s a mixture of townhouses and houses on small blocks.”

The development has attributed to the suburb’s population growth.

During the same period the number of dwellings rose from 2657 to 3713.

More homes will come on the market by 2024 when a planned estate on the old QUT campus site is developed.

The Carseldine Urban Village project was announced in late 2016 by Deputy Premier Jackie Trad and was to be built in four stages over four years and house 3500 residents – although it’s expected to be six years before it is completed.

The development will have no impact on the future of the Saturday morning Carseldine Markets on the site of the former QUT campus although there were some communication issues to begin with, said market co-ordinator Mark Power.

Regardless of when the new estate is delivered, the markets, which feature more than 180 stalls covering produce, art and craft and farmers market, will remain, he said.

“There was the misconception the whole site was being resumed and developed… but the market is staying,” Mr Power said.

“It’s woven into the former campus and we have live acts, an animal farm and jumping castles and there are more than 450 car parks.”

A spokesperson for Economic Development Queensland said the first stage of the housing development should begin after the construction of a 4ha sport and recreation precinct.

The former campus is within walking distance of the Carseldine railway station which also helps locals avoid the pain of peak hour traffic along Gympie Rd.

Mr Spillane said the traffic woes were the result of congestion a few kilometres down the road at Chermside.

“The traffic congestion is more at Chermside, where the shopping centre is, and builds back from there,” Mr Spillane said.

It runs 9km through the heart of the northside from South Pine Rd and Shand St, Everton Park to Gympie Rd, Carseldine (at the Gympie and Gympie Arterial Rd).

Ms Cooper said it needs to be developed into a light rail line, a road, a busway or a combination of the options, because “Gympie Rd was at capacity”.

“We would really encourage the State Government to consider the corridor and what options are for better public transport and deal with traffic congestion.”